On November 10, People‘s newest Sexiest Man Alive Chris Evans revealed that he has been dating 25-year-old actress Alba Baptista for at least a year and “it’s serious,” according to a source, who added,“They are in love, and Chris has never been happier. His family and friends all adore her.” 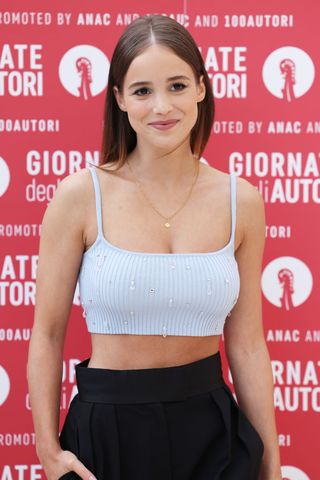 This is everything about Baptista and their relationship timeline so far.

Who is Alba Baptista?

The actress is best known for her role on Netflix’s Warrior Nun, her English-language debut.

Baptista is from Portugal and was born in Lisbon. She has starred in several popular Portuguese films and TV shows, including A Impostora, Filha da Lei, A Criação, and Jogo Duplo. After Warrior Nun, she starred in the 2022 dramatic comedy, Mrs. Harris Goes to Paris.

Outside of acting, she has a passion for charity work and in 2018, worked at an orphanage in Cambodia focusing on education. She also speaks five languages, including Spanish, French, German, English, and her native Portuguese.

How long have Chris Evans and Alba Baptista been together?

The almost a year estimate is partially based on some fan detective work. The couple follows each other on Instagram, though they haven’t yet gone “Instagram official” by sharing photos of each other. Cosmopolitan reported that Baptista’s mom used the same pumpkins seen on Evans’ Instagram as her profile photo for the social media platform, tipping off the sleuths. He has also been liking all of Baptista’s photos since October 13, as well as a few back-dated ones from July of this year and August of 2021.

How serious are they?

In his interview for the Sexiest Man issue, Evans didn’t get too specific about who he wanted to settle down with, but he did talk about wanting to take things further in his romantic relationships than he has so far.

“That’s absolutely something I want: wife, kids, building a family,” Evans said. “When you read about most of the best artists, whether it’s actors, painters, writers, most of them [admit] it wasn’t the work they made [that they are most proud of], it was about the relationships; the families they created, the love they found, the love they shared.”

He continued, “So it’s also something through my long 41 years that also rings true. Those things are the most important. I love the idea of tradition and ceremony. I had a lot of that in my life, so the idea of creating that—I can’t think of anything better.”

There’s no saying it’s with Baptista, but she is the woman in his life right now.

Stay in Shape Without Leaving the House (Get Fit at Home)

Who Is Adam Shulman? – Meet Anne Hathaway’s Husband and Father of Her Two Kids

AirPods Sale on Amazon As Low as $79