By some measures, House of the Dragon—the prequel HBO wants so obviously to meet the precedent set by its original series, Game of Thrones—has done the remarkable. The show has restored interest in a dormant franchise (dormant, in the sense that it was not airing new episodes) and renewed the faith of a jaded fanbase, following an ugly final season of Thrones. But perhaps what’s most impressive about Dragon’s run so far is how it has hoisted fan-favorite characters—whose names seem to go viral on Twitter every Sunday night—despite the series’ major flaws: erratic time-skips; brushed-over world-building; and integral scenes left on the cutting room floor.

As a sum of its parts, I don’t find these mistakes eclipse Dragon’s overall success and impact. (I am happily tuning in every week, as riveted as I was at the height of Thrones’s popularity.) But there are moments when the missing connective tissue between the episodes feels less like necessary sacrifice than chasmic loss. Such is the case with Laena Velaryon, played with dependable charisma by Nanna Blondell in the few scenes we get to watch her.

We’ve met Laena before, first as a 12-year-old seeking to marry Paddy Considine’s Viserys I Targaryen, in order to seal the alliance between her household and the king’s. In a stunted stroll through the gardens of King’s Landing, she inquires about the whereabouts of Vhagar, the sister of the deceased Balerion the Black Dread (once Viserys’s own mount) and the only still-living dragon to have witnessed and participated in Aegon’s Conquest.

Flash forward to episode 6 of House of the Dragon, in which a decade-long time jump takes place, and Laena is a grown woman. She’s now married to Viserys’ brother, Prince Daemon Targaryen (Matt Smith), with whom she has two daughters, Baela and Rhaena, and a third child on the way. She is also Vhagar’s dragon rider, though we never get to see how or why Laena and the enormous, ancient she-dragon first bond. Too many years have passed since we last encountered Laena, and the writers must have worried that specific mention of how she and Vhagar came together might seem forced. We must then take for granted that the two are close, perhaps even as close as Daenerys Targaryen and her beloved dragon offspring in Thrones. Either way, most of this intimacy is coded into the background of each scene, rather than expressed in action, which means the ensuing scenes work better for audience members familiar with the literary canon than for those new to Dragon’s world.

And so, when Laena meets her fiery end, it is hard to parse exactly how gutting this should feel—and particularly how it should impact Daemon, Laena’s husband and a frontrunner for audiences’ favorite character. Two-thirds of the way through episode 6, Laena is in the throes of labor, and it’s clear things are not going well. The maester tells Daemon that the baby refuses to deliver, and there’s nothing more he can do for Laena beyond an emergency C-section, which will kill the mother. Daemon shakes his head, knowing full well what happened to his brother’s wife during her own C-section. He will not subject Laena to that torture.

Instead, Laena—aware that this birth will end in septic infection and a slow, gruesome death regardless—chooses to die by the hands of her closest ally: Vhagar. Still in active labor, she stumbles out to the shore, where a decaying but beautiful Vhagar kneels amongst the rocks. The beast, whose face is carved with scars, seems genuinely horrified by her rider’s agony. Laena demands her dragon set her on fire and end her misery. Vhagar hesitates, only choosing to follow her master’s wishes right as Daemon reaches the coastline.

In an interview with Variety following episode 6’s airing, showrunner Ryan Condal explained why Laena went out like this. (In the book House of the Dragon is based on, Fire & Blood, she gives birth to a “twisted and malformed” baby, then spends three days in delirium before staggering out to meet her dragon, only to die before she reaches Vhagar.)

“Laena’s a valkyrie,” Condal said. “She’s a dragon rider…It felt like she wouldn’t want to go out the way that the history book said. Unfortunately, because of the nature of the season and the storytelling, we didn’t get to spend as much time as I think we would have preferred to with Laena. We had to keep the story moving. So we wanted to give her a memorable out that felt active and in her character. Even though we’re only with Nanna Blondell’s portrayal of her for a very brief time, within that moment, it tells you a lot about who Laena is and was.” 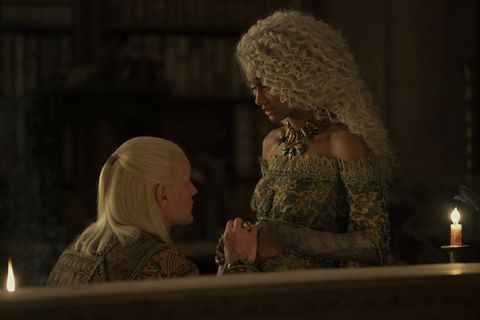 I respect this change from the book; it gives Laena the autonomy she deserves, and saves audiences the trauma of witnessing another horrific, drawn-out demise. But the choice to “keep the story going” rather than grant us more time to know this character—one whose love and loss certainly seems positioned to have profound impacts on Daemon—is far from a passive one. Daemon is a key figure in the Dance of the Dragons, but he’s now burned through—no pun intended—two wives in as many episodes. Are we to pretend to grasp exactly how they impacted him, without having seen practically any of their interactions?

But it’s not just about Daemon. It’s about Laena herself, another character in Dragon who pops up long enough to spur events along, then bends to the inevitable, supposedly “necessary” acceleration of plot. In the same episode, we lose Ser Lyonel Strong and Ser Harwin Strong, lover of Rhaenyra Targaryen, before we have any real opportunity to understand who, precisely, we’re losing. Kudos to the cast and crew for making these losses feel as awful as they are, but imagine their impact had we actually known these characters.

Dragon is juggling an enormous cast of characters and a world so expansive its creator, George R. R. Martin, can barely keep the pages churning fast enough. I understand the need for narrative discretion, especially in a 10-episode season of television. But while Laena’s “dragon rider’s death” speaks to her autonomy, that symbolic gesture is undercut by her subsequent erasure from the rest of the series. These traumas are not small in the eyes of Dragon’s characters; nor should they be in the hands of the show’s creators.

Lauren Puckett-Pope is an associate editor at ELLE, where she covers news and culture.

How to Use Rosemary Oil to Strengthen and Grow Hair

Garden Planner and Journal: Calendar and Diary for 1 Year, Starting Any Time (A soft covered large notebook with a…