On Wednesday, Angelina Jolie strutted from an office building in Beverly Hills wearing all black in an outfit that was half form-fitting and half loose and casual, but entirely chic. Her cropped black tank top showed off her abs and paired with low rise black pants that draped in loose waves around her legs as she walked.

The Academy Award winning actress paired the outfit with chunky black sandals and accessorized with an ICARE quilted tote by Yves Saint Laurent made of lambskin and detailed with gold chains. She had on a large pair of sunglasses and some simple gold jewelry around her neck and in her ears. Her hair was parted to the side and left hanging down. 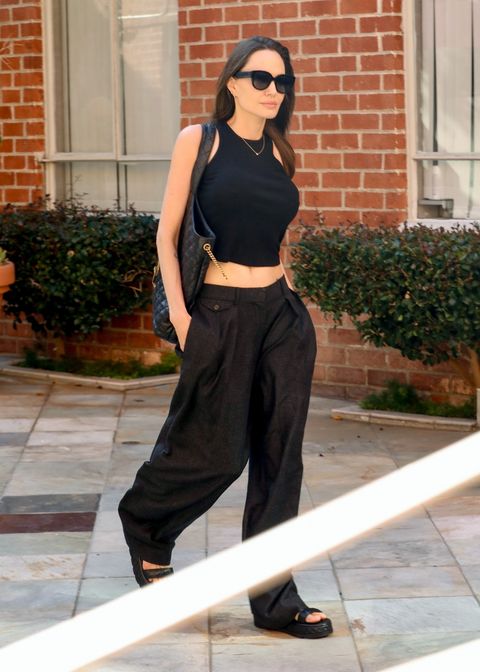 Jolie seemed relaxed, though recent weeks have involved quite a few challenges as details of her ex-husband Brad Pitt’s behavior that led to their separation were released. A report from the FBI was made public after the actress applied for the info using a pseudonym under the Freedom of Information Act. The couple split in 2016 after the incident, which took place aboard their private jet. Allegedly, he criticized one of their children and told Jolie she was “ruining the family” during their heated argument which escalated to a physical fight. The former couple share six children, daughter Shiloh, 16, twins Knox and Vivienne, 14, daughter Zahara, 17, and sons Maddox, 21, and Pax, 18. Pitt supposedly was targeting Maddox during the altercation.

Jolie filed for divorce just four days later after a five year marriage and they have since been battling for custody, though they have been legally single since 2019. She is currently working on a new project, directing an adaptation Alessandro Baricco’s short novel Without Blood. The film stars Salma Hayek as a woman who witnessed horrific violence and war crimes, and plays on themes of revenge and forgiveness, according to the director.

“The reality of these never-ending wars we have has helped me to look at violence and trauma and revenge in very different ways, and there is no easy answer,” she told Variety.

Billie Eilish on Launching Her Second Fragrance, Eilish No. 2